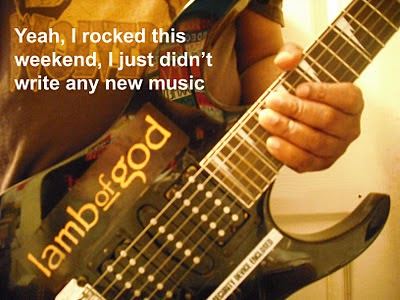 – Recorded video tutorials of the songs “The New Regime” and “Revenge” for Joshua so he can learn them.

– Managed to convert that Motosota DVD into MPEG format. Next task is editing the files into separate song chapters for uploading.

– Unfortunately, I’ve learned that searching for copyright free images for your own personal manipulation is an exhaustive process. I’ve got three covers to design. Well, two now, as I managed to find one last night (not sure I’m totally happy with it yet). The clock is ticking as I planned to make my Smashwords debut on Friday.

– Accepted another story for my Local Heroes anthology. That’s slowed to a mere trickle these days.

– The bad news: I didn’t write a lick of fiction this weekend.

– The good news: Two new story ideas have arrived in my noggin’. One of them is surely to be micro or flash fiction. The other one I’m unsure about. Also, I have another article on writing underway for Flash Fiction Chronicles. You can read my first one here.

– I discovered that I really do miss the characters in my novel. I can’t wait to get back to them and their world this summer.

– I played a lot of Halo: Reach multiplayer with some friends this past week. Making up for lost time, time that was previously devoted to all the non-fiction stuff I’d been doing the last two months or so. Well, when I wasn’t playing Mass Effect 2 for a second playthrough.

PROMISE TO SELF: I’ll try to do better next weekend. During the week, however, I should probably be focused on prepping those four stories for Smashwords.