Rockville Music Magazine (RMM) has an exclusive interview with my ultimate guitar hero, James Hetfield (of Metallica) who appears in the new documentary film ABSENT by filmmaker Justin Hunt, which examines the affect absent fathers have had on their children (i.e. the Father Wound) who are now adults and parents in their own right.

Clicky this link to read the interview: RMM: James Hetfield Interview with Filmmaker Justin Hun…: “Hetfield and Hunt Fighting for Fatherhood – An RMM Exclusive by jhs.

jhs: James, do you ever look back and see a pivotal moment where it just clicked for you, what kind of dad you wanted to be?

James: That pivotal moment was, and I can close my eyes and be there again, it’s in our house, a couple of houses ago. We moved to try to get some better vibes elsewhere (laughing).

Sitting in the house, visiting my kids because [at the time] I wasn’t really allowed, because I wasn’t living there. But just sitting with the kids and just realizing, ‘you know what, I don’t have to do anything else. I don’t have to show up for this gig. I don’t have to, you know, I can be late for this. All that shit can go away. All I have to do is just sit here with my kids,’ and that is fine.

It was the pivotal moment that I realized there is a certain priority in this life and they are at the top of it. 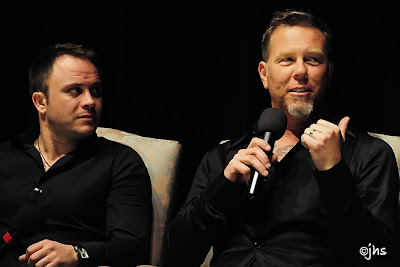 It’s a great interview with James, very candid and revealing about his own Father Wound and how it has affected him as a father of three.

For more about this internationally awarded film, check out the trailer.

As a father also, this is certainly a film I can get behind and support.