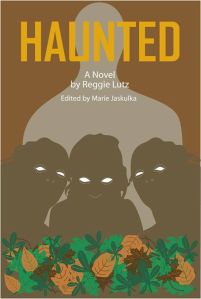 In this latest edition of “friends of B” spotlights I have fellow music enthusiast and writer buddy Reggie Lutz (call her Regina at your own peril).  Ms. Lutz is the rather seriously talented and up-and-coming author of the novel Haunted.

Here’s a summary tease from the Amazon listing description:

Gwendolyn McTutcheon can’t move on even though she’s been dead for a year. Having left behind a grieving husband, Evan; and three sisters, Trudy, Bethany, and Sarah; she knows there is work yet to do.

Sarah, Gwen’s youngest sister, is back in town to help her two remaining sisters confront a depressed Evan about settling Gwen’s will. Still grieving—and raw from wrongful accusations made by Trudy and Bethany that he’d murdered his wife—Evan must set to the task of putting the past, and Gwen, to rest. But not all of the past stays in the past when Sarah offers her help and a romance between her and Evan begins. After all, it was that inappropriate kiss years ago that sparked the notion he might have harmed his wife in the first place.

As Gwen watches, unable to intervene, Trudy and Bethany keep secrets of their own, secrets that level the field and make Sarah consider coming home to stay again. But when an arsonist sets his sights on Evan’s bar, Duard’s, and Sarah’s life is threatened, Gwen knows she must find a way to intervene, for her family and for her own peace.

Reviewed quite well with a four-and-a-half star average rating, Lutz self-published this debut novel of hers in April 2014 via Amazon Digital Services for the Kindle (a paperback edition was also issued that following May via CreateSpace).  Self-publishing your debut novel is no easy task for any author, but I have to believe it is totally worth the blood, sweat and frantic typo-catching.  By most accounts, it’s after the novel is finished where the real challenge begins in the form of self-promotion and marketing.  Most of us, while maybe not exactly humble (we wouldn’t be publishing our writing if we were), are not as comfortable or seamlessly suited for the occupation of hardcore self-marketing that goes along with self-publishing just like jam goes with peanut butter.  Ms. Lutz, in a recent interview, said as much with the following quote:

“…the biggest challenge is creating signal out of noise. What I mean by that is figuring out how to get the work into the awareness of the audience that might want it.  Marketing and promotion are uncomfortable, but necessary.  If you self-publish it means doing it yourself.”

Read the rest of the interview here at Julie Doherty.com.

In other Reggie Lutz news, she’s close to finishing up her next book publication, Aliens in the Soda Machine and Other Strange Tales, a long-gestating collection of short stories told with that classic Reggie Lutz eye on the strange and bizarre. The book will be available for Kindle download on May 1st.  See the over art below.

History: Reggie and I met, virtually, in the fall of 2008 when I had opened up a private office dedicated to reviewing novel chapters over at the Zoetrope Virtual Studio.  I remember my first impressions of her being that she was cool, funny, liked good music, loved the strange and bizarre and was perhaps the lovechild of star-crossed hippies.  This was all reflected in her writing as well. I still cherish the advice she gave me on one my chapters.  Obviously she’s long since gone on to kick some writing ass, having completed and published a novel.  She’s an inspiration.

About Reggie Lutz (from Amazon): Reggie Lutz lives on top of a mountain with a parrot who offers editing advice and a dog who offers comic relief. A radio broadcaster in the 90s and early 2000s, she has turned her attention to fiction, although she can sometimes be heard in a volunteer capacity at WRKC.

Check her out, y’all.

And be good to one another.

One reply on “MEET REGGIE LUTZ – AUTHOR OF HAUNTED”

[…] more about.  In this inaugural edition I have fellow indie author Reggie Lutz (I’ve said this before, call her Regina at your own […]