Candice is feeling a bit lonesome. Of the four stories I have up over at Smashwords, “Pieces of Candice”, an Edgar Allan Poe inspired horror story, is trailing behind in downloads. She needs your help (and if you read the story, you’ll know why).

As a psychological horror story with a touch of gore, it’s certainly one of the darkest pieces I’ve ever written. It’s also one of the earliest as the seeds for it date back to 1994 as I was reading a lot of horror and suspense back then. Writers like Clive Barker, Ramsey Campbell, Stephen King and Dean Koontz, to name the heavy hitters. When I finally took a stab at writing it in earnest, it took roughly three years of stops and starts to finish it because it was difficult to slide in and out of the narrator’s disturbed mind. I felt pretty icky at times, other times I’d chuckle at my sick sense of the grotesque.

Although I finally finished it in the late 90s, I didn’t pursue getting it published until the summer of 2010 when editor/publisher Chris Bartholomew (Static Movement) put a call out for stories dealing with madness for an anthology aptly titled Madness of the Mind. With a title and theme like that I knew that “Pieces of Candice” had a likely home. Thankfully, I was right, although I made some changes to certain details and updated others to bring to this current century.

Recently I decided to publish the story on Smashwords as an “e-book” so that it would exist in print as well as online and digital download. That’s the mode for modern publishing, going with multiple formats (similar to how recorded music has almost always had multiple formats).

If you’d like to step into the chilling, sociopathic mind of Jules (the narrator) for a little night reading, click on the cover image below to access the Smashwords download page. Just be sure to dissociate the art from the artist. -_^ 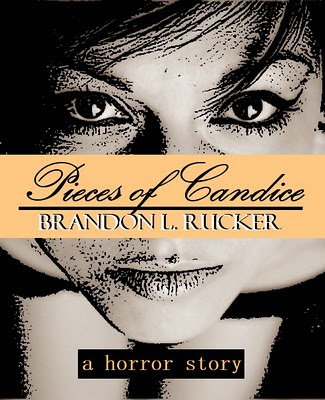 These folks at 40k Books hit me up on my Twitter account and are now following me. I’m guessing they found me through Smashwords. So I checked them out. One typo on the front page aside, what I’ve discovered looks pretty good. They publish only novelettes and novellas.  With that model they have published some Hugo Award and Nebula Award winning auhors, as they specialize in speculative fiction (sans fantasy). They are an international organization.

There is an interview over at Writer’s Digest: 40k Books is An E-Publisher That Specializes in Original Short Works

I like this quote from one of 40k Books’ essays: “Ever-tougher competition for eyeballs, coupled with drastic structural changes in the publishing industry – such as the rise of ebooks and the decline of traditional bookshops – means that today’s authors must adopt an entrepreneurial attitude. They need to take a leaf from the book that’s being written in the music business, where bands are building brands without the aid of record labels and similar intermediaries.”

“Writers, regrettably, are reluctant to take this responsibility. There is a widespread perception that culture and commerce are incompatible. Marketing is still erroneously associated with Yeats’s ‘greasy till’ and Orwell’s egregious ‘swill bucket’.”

Yet I am unaware of any advantage 40k Books would have over simply going rogue (i.e. the independent route) with Smashwords, but if you’re looking to push yourself beyond the short story form and go digital, you may as well explore all your options.

Of course, if you’re completely against the digtial revolution in publishing and loathe the idea of people reading your words on some silly electronic device, then completely disregard this information. 🙂

J.A. Konrath is a thriller author who is notable for being a success in the independent/self-published author’s game. In his latest update, “The Numbers Game” he breaks down the dollar$ and $en$e of e-book, publishing. It’s a must read for any independent author.

Clicky to read more: A Newbie’s Guide to Publishing: The Numbers Game