Celebrated and award-winning comics/graphic novels author Ed Brubaker (CRIMINAL, VELVET, CAPTAIN AMERICA, THE WINTER SOLDIER), one of my faves, shared some sage writerly advice and wisdom today in his latest newsletter From the Desk of Ed Brubaker, of which I must make note.

“If you are a writer, if sitting and thinking followed by sitting and typing is what you want to do for a living, I can’t urge you more strongly to get regular cardio and get up from your desk a lot and stretch.

I can’t stress enough how easy it is to fall into bad habits in this profession that can cause you major health issues. In my career I’ve had to deal with repetitive strain injuries, tendonitis, chronic TMJ pain (from clenching my jaw when I get lost in writing) and lower back problems. And recently, while trying to get back into good cardio shape, I injured my ankle – the cause, having my foot bent weird while I typed.”

Actually, that’s good advice for anyone who works at a desk for long periods. He even provided this handy infographic.

As for writing work/life balance, something I know I personally struggle mightily with, the crime/noir-loving writer said:

“And work/life balance? That can be hard to manage, too. When I’m being good at sticking to my work routines, ideally I’m not in front of the computer for more than four or five hours a day. Kurt Vonnegut said no one should be required to be smart for more than four hours a day, so I try to follow his example. Then lately, after I’m done typing, I go for a 20 mile bike ride, and I’m starting to take some yoga classes. But I’ve had long periods of my career where I spent all day in front of a computer for months with no exercise, and I regret that a lot.

Writers are always writing in their heads, even when they aren’t typing or scribbling, so that’s one anyone in a relationship with a writer has to put up with. Even when they’re with you, they’re kind of not.”

The struggle is real. I know it’s a rather trendy and passe thing to say these days, but that doesn’t make it any less valid.

Mr. Brubaker’s words (and the source from which they come) are Copyright © 2016 Basement Gang Inc., All rights reserved. Mr. Brubaker’s photo is courtesy of Comics Vine.

Very astute from Ms. Lamb. Any serious writer has dealt with this.

Last time I wrote about stress and how it can kill creativity. Many “normal” people (code for “non writers”) see our job as play, as fun. They really don’t grasp what goes into creating the stories they all enjoy and that it is a lot of work. Also, because our field is so subjective, writers must endure an onslaught of “enemies” no one else can see because often they are in our head. Sometimes, in our effort to produce the best work we can, we invite in a very dangerous enemy.

All of us want to do a good job. We want to put our best foot forward. We all say that we want feedback and critique, but deep down, if we are real honest, we want people to love everything we say and do. Unfortunately, this isn’t the reality. We can’t please everyone, and it is easy…

via Writing is NOT so painful!  — World of Horror 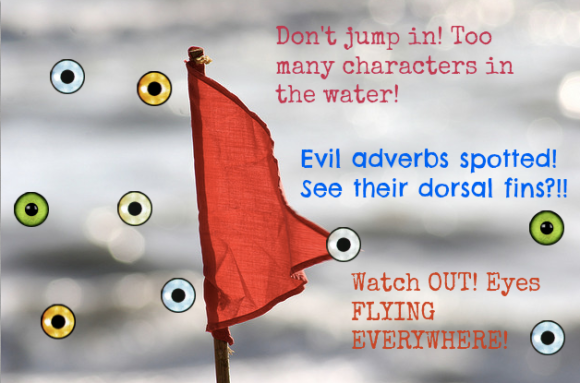 Whether you are new to writing or an old pro, brushing up on the basics is always helpful. Because no matter how GOOD the story is? If the reader is busy stumbling over this stuff, it ruins the fictive dream and she will never GET to the story. So today we are going to cover six ways to self-edit your fiction. Though this stuff might seem like a no-brainer, I see these blunders ALL the time.

….unfortunately even in (legacy) published books.

When I worked as an editor, I found it frustrating when I couldn’t even GET to the story because I was too distracted by these all too common oopses.

There are many editors who charge by the hour. If they’re spending their time fixing oopses you could’ve easily repaired yourself? You’re burning cash and time. Yet, correct these problems, and editors can more easily get to the MEAT…

Quoted from: Six Ways To Self-Edit & Polish Your Prose – by Kristen Lamb
http://wp.me/py7Aw-54v

“You are such a jerk,” she laughed.

A character can’t “laugh” something. They can’t “snip” “spit” “snarl” “grouse” words. They can SAY and ever so often they can ASK. Said becomes white noise. Readers don’t “see” it. It keeps them in the story and cooking along. If we want to add things like laughing, griping, complaining, then fine. It just shouldn’t be the tag.

“You are such a jerk.” She laughed as she flicked brownie batter onto Fabio’s white shirt.

There you go, SIX easy tips for self-editing. We all make these mistakes and that’s why God invented revision (that and to punish the unfaithful). If you can get rid of these common offenders on your own, then good editors can focus on the deeper aspects of your fiction.

Something else that comes to mind as I’m editing ( I mean truly editing) a portion of the the last story I accepted for my Local Heroes anthology, is that some writers do not write with the reader in mind at all. They just write the story however it comes out of them with little regard for how that might read to the outside reader. That’s what I consider casual writing, writing that the writer has done merely for himself. It’s not what I call “performance writing” where a writer is writing with a would-be audience in mind. Again, that points to what I’ve said earlier about being a deliberate storyteller. If you’re writing merely to amuse yourself, then why submit to an editor in an attempt to get published?

The story I’m editing at the moment is marred by the writer’s disregard for the reader. Many sentences meander and put-off the reader with a plethora of extraneous words and details that get in the way of what the reader is truly after. When there’s bloat like that it just dulls the story and undermines its overall impact. I’ve accepted the submission because the story is good and as an editor I know I can edit it down a bit to get directly at its core essence and increase the intensity, clarity and overall effect.

What am I getting at here? It’s easy to simply say “Well, the writer should have spent a great deal of time editing his own story prior to submitting it to an editor”. Fair enough. But my point in all of this is: why not take the care…why not take that exacting, precise approach to the story during the actual writing? Why wait until the end when you have to go through 4000 words in totality, when you can simply take care of things on the front end of the process (during initial draft) and make it easier on yourself as the writer and by extension and ultimately for the reader?

Just the musings of a curious and very opinionated editor.

The following opinion piece was written yesterday in one of the private offices (writer’s forum) at the Zoetrope Virtual Studio.

Being someone who is constantly evaluating things, I find myself compelled to respond to other people’s ideas when they get me thinking. Yesterday it was fellow writer Bonnie ZoeBell’s article over at Flash Fiction Chronicles in which she wrote:

“…you don’t have to know where you’re going when you begin a story. There simply has to be something, however small, that makes you feel like writing—an image, an overheard piece of dialogue, a situation.”

I agree with this, but to a point. I think if you’re writing just to be ‘writing’ and just to be a ‘writer’ (because, hey writers write, right?), then this is spot-on. That’s the passive approach (for lack of a far better term).

However, if you’re writing as a deliberate ‘storyteller’ first, then I think a lot more thought and ‘knowing’ needs to go into the process (active, or proactive; again for lack of better terms). Deliberate storytellers are loathe to writing themselves into corners (not to say they won’t because they will). They’re agonized by it, not nonchalant about it as the above idea kind of suggests. The deliberate storyteller will generally be a step ahead in the process of translating ideas into the story from thought into writing. This is not to suggest that they’ll have everything mapped out or even set in stone because storytelling is too creative, fluid and elastic to support that method successfully.

Naturally, everyone is different, so some people are good at ‘planning’, others are better at flying by the seat of their pants. Or, even if they’re good at neither, they have their preferred methods. You could even say that one type is more about feeling; the other is more about thinking. For me music making is more about feeling and flow and feels less like ‘work’; writing is much more cerebral and labor intensive due to its process and speed limitations.

Of course, what I’ve described above are the typical ‘two schools’ of writing, if you will; the free-flowing writer and the methodical storyteller. I think a hybrid of both would be an unstoppable artist. I’d like to achieve that happy medium someday when I grow up. Until then, I’m happy to be a methodical slowpoke who puts the story ahead of trying to zip through my stories for the ultimate goal of publication. That will come in due time. Nine out of ten things I’ve published so far were not things written in a mad rush with little regard for self-editing. Am I thrilled that the process can take so long? No, but it’s something that I accept as necessary (quality over quantity).

However, I will say that if you’re actually allowed more uninterrupted time to simply flow without other obligations intervening (like a day job that takes you away from your writing desk for 10 or more hours a day, plus having to make time for that weakness of the human condition called sleep), then it’s much easier to get lost in it all and progress toward a more relentless flow. But the constant stop n’ go of it, at least in my life, is so disruptive that it helps to have a little planning. I’m always envious of professional writers who are afforded the luxury (yes, luxury) of writing 8-12 hours a day. How could you not be more productive and “free” with that kind of regimen?

Side note: I had a writing advice kind of article published at Flash Fiction Chronicles back in Februrary. Linkage.