Aside from not getting a lot of new information (for those of us who’ve been around since then), the one bad thing about these kinds of documentaries is how they tend to get the chronology all wonky. You don’t cover the start of Robert Kirkman’s The Walking Dead (October 2003) and say THEN Powers (April 2000) came out and Brian Michael Bendis was fired by Todd McFarlane off of Sam & Twitch (series debuted in August 1999) and also say he then went on to write Marvel’s Ultimate Spider (also started in 2000) and Alias – Jessica Jones (later in 2001). Or how about toward the end when they had a footnote saying that Kirkman’s Outcast TV show debuted in the year 2010, the same year as TWD TV show?

There were a couple of other examples. I believe it’s important to get that kind of minutiae as precise and accurate as possible when presenting a historical documentary. That’s often compromised when things are edited for bite-sized consumption. [end nerd rant].

At any rate, it’s always a treat to watch and hear the boys talk about their awesome shared baby in the form of Image Comics. 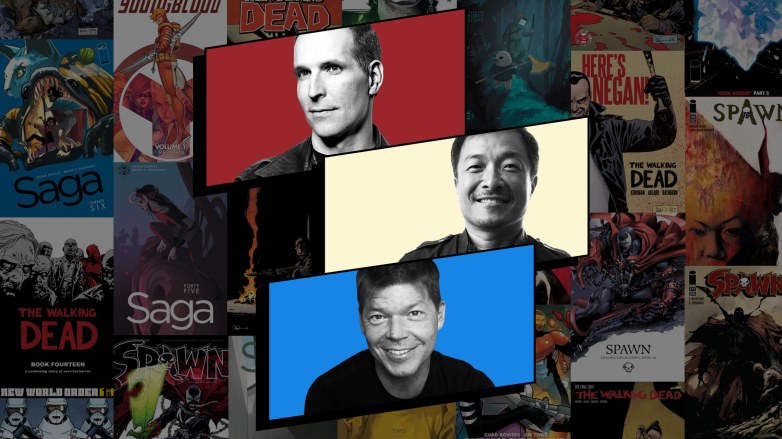 Was re-reading the third issue of Image Comics’ awesome comics magazine, IMAGE+ (June, cover dated September), and in that issue there is an interview with THE FIX co-creator and artist Steve Lieber that I think is worthy of spotlight.

I think his words here highlight one of the main issues many have with the company-owned comics, whether it’s the creators who work there or the disgruntled fans like myself who’s pretty much sworn off Marvel Comics for a few years now.

Check it out below. 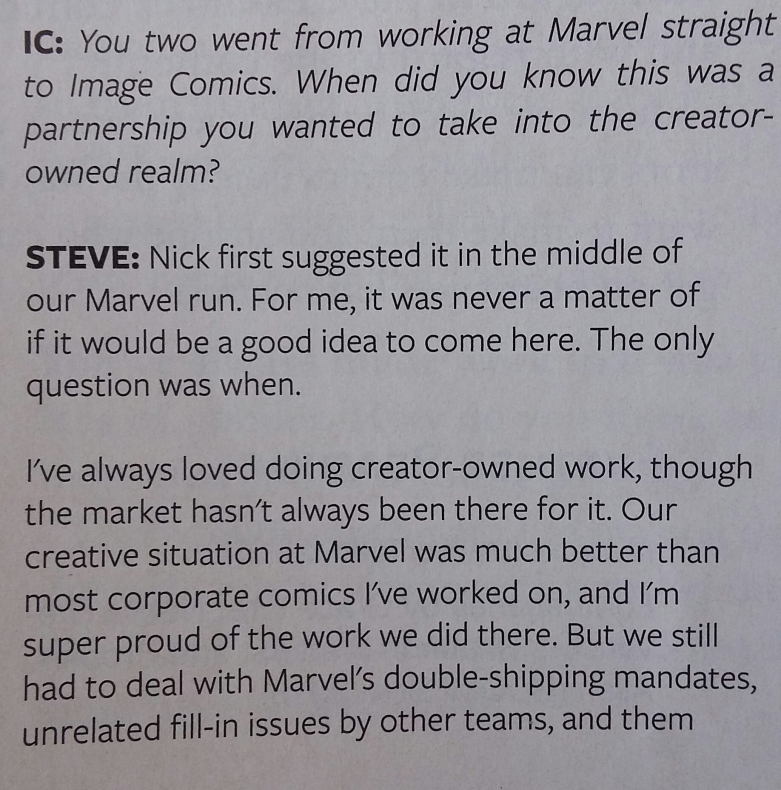 The poll Question I posed to the members of my Facebook group The Comic Book Underground last week:

The majority of your monthly and/or trade paperback reads come from which of the following publisher?

With only 21 participating votes, the results were:

DC Comics (Including the Vertigo imprint)

The resurgent #2 publisher in the market with 8 total votes, which ties them with the #3 publisher.

The #3 publisher took the early lead in the poll (a charge led by yours truly, of course), but ultimately tied with the house of DC: Rebirth with 8 total votes also.

The currently battle-tested #1 publisher takes the third spot with only 4 total votes, which is a surprise because 12, 18, 24 months ago this would not have been the case. If the CBU is but a tiny microcosm of current fandom, then it appears Marvel has fallen from grace a bit.

Arguably “the best” non-premier publisher under Diamond’s distribution umbrella, the house of Harbingers brings up the rear at the fourth spot with merely one vote. However, it beat out AfterShock, Boom! Dark Horse (my current #2 personally), Dynamite, IDW and Other, which all had zero votes, so there’s that at least.

In this first edition of the new feature I’m calling BENEATH THE COVER, I take a look at the second issue of my new favorite magazine about comics, Image+.