It should probably go without saying that if it’s a Skybound book it’s going to read well. I currently read Skybound titles such as Redneck, Extremity and I’ve read Gasolina and Green Valley, I have a Ghosted trade paperback on my shelf yet to read, and I’m now trade-waiting Birthright after reading it in floppies for the first 20 issues or so. Skybound Entertainment founder/CEO Robert Kirkman and company have a lot to be proud of these days. They’re one of the best comics lines around, a line that also includes Manifest Destiny, Kill the Minotaur, Outcast, Invincible, and of course The Walking Dead.

And I have no doubt the Image Comics remaining founders/partners are glad they made Mr. Kirkman a partner nine years ago.

The newest Skybound title Slots by creator/writer/artist Dan Panosian – the first issue was yet another fine Skybound read. It takes place in Vegas and features a middle-aged guy trying to get back in the game – of gambling and boxing – and make a big score. Is it a crime book? Maybe not per se, yet, though I could see it going down that route at some point (hopefully). But it is heavily soaked in the same kind of flavor of crime and suspense-thriller comics as books like Criminal.

Marvel Legacy #1 – I’ve got love for writer Jason Aaron – a very nice Southern Gentleman I met at New York Comic Con some years back, so I take no pleasure in saying this about a book he wrote. I initially passed on this the week it came out, but against my better judgment I decided to give it a shot the following week. Well, I’d like my $6 back. Bamboozled again. I was told it was a really good story and that it was just like DC Universe Rebirth. False. It would’ve been better had they totally aped Rebirth. The comparisons to DC Rebirth are superficial at best. Of course for it to be like Rebirth that would require a kind of reboot that would abandon the recent narratives they’ve just emerged out of the last five years since their Marvel NOW! Initiative. Legacy mimics Rebirth terribly, but again, given that it’s not a ‘rebirth’ or even a fresh restart, that’s to be expected. Btw, having 3 uniformed beat cops showing up to arrest Deadpool for the murder of SHIELD’s Agent Coulson is . . . an ill-advised story decision (it would actually be the FBI or some other abbreviated/acronym-ed agency, or even a vengeful former SHIELD Agent would work). Moving forward I suppose I will simply stick to Jessica Jones and The Defenders – the only two Marvel series I’ve been reading the past year.

Legacy vs Rebirth? No Contest 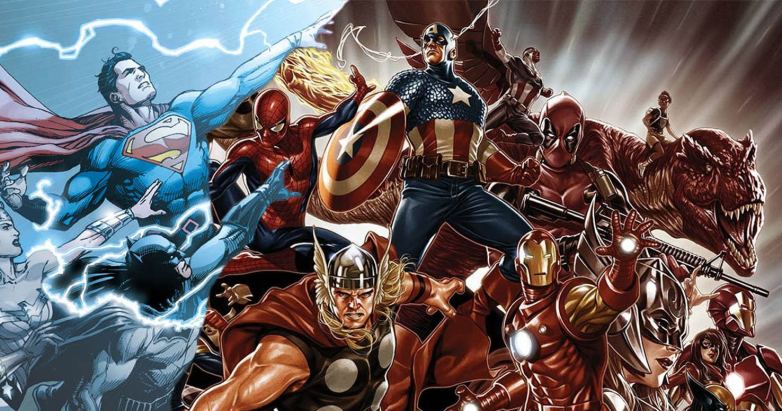 By the way, I have a little rant inspired by Marvel Legacy. CBR.com (formerly known as that great entity Comic Book Resources) ran an article with this quote:

“It’s definitely an effective way to set up a new line of comics, and you can’t fault Marvel Legacy for copying the Rebirth formula.”

CBR has officially left the reservation! How the hell does Legacy copy the Rebirth formula??? How does it set up a “new line” of comics when Marvel isn’t launching a new line of comics?

And to go off on CBR even more . . .  in a different article they said DC’s Vertigo Comics launched with The Sandman #1 in 1989, when Vertigo actually “launched” in 1993 — hence 2018 being the 25th anniversary of Vertigo Comics as an imprint. I’m not sure why CBR’s editorial staff couldn’t seem to reconcile that simple math . . . I guess because their start date was all wrong. It wasn’t 1989. Granted The Sandman started with a cover date of January 1989. But the Vertigo imprint was not adopted and applied to certain pre-existing DC comics like The Sandman, Hellblazer, Doom Patrol, Shade: The Changing Man and Swamp Thing until 1993.

When it comes to CBR I still lament the fact that former owner and founder Jonah Weiland sold away what USED to be the gold standard of comics news sites.

News and such coming out of New York Comic Con

I am writing this on Saturday night going into Sunday morning, so New York Comic Con is still going on, but there are a few things of note.

Doomsday Clock, the upcoming Watchmen sequel – this might be the first Mature Readers story to feature Superman? But hey, it’s Geoff Johns writing it, right? Surely there won’t be a cussing Superman, right??? Nah, but ol’ Supes may have to witness some naughty words . . . or maybe just share pages in a book has some “mature” content. At any rate, I think Supes is strong enough (and man-of-steel-enough) to handle it.

Sticking with DC Comics – they are dropping the Rebirth banner on their comics soon (like, this December soon) and going with a new trade dress that’s probably their sharpest looking yet, because let’s face it, DC’s trade dress has always been less than stellar compared to Marvel’s and other publishers. Now they’ll have a corner box with the DC circle at the top, followed by the issue number and price and then below that will be the family name icon such as Superman, Wonder Woman, Batman, etc.

They look good and you can get a first look at them over at Bleeding Cool.com

Over at Marvel, the only thing of note for me in regards to their comics are rumors or hints of a new Storm of the X-men series. Please, please let it be written by Chris Claremont. He’s the best writer of Ororo Munro in all of her history, and it’s the best option for Marvel to get some publishable work from the man, the legend they’ve been paying for a decade to essentially NOT write comics for them or anyone else.

Oh, you didn’t know that? Yeah, it’s been confirmed that Marvel actually has  Chris Claremont on a kind of retainer, pretty much paying him some kind of salary as well as provide health benefits so that he does not do work-for-hire superhero comics elsewhere. Think of it as an exclusive contract that several of today’s creators have – only this one is for a creator whom they do not stipulate that he produce X number amount of scripts. They’re essentially paying him NOT to write since they haven’t given him any assignments in a good while now. Comics best kept secret – it’s almost scandalous, really. Set Chris Claremont free, Marvel! Or, at least allow him to write that new Storm series.

So DC’s Vertigo imprint will be re-launching in August 2018. I remember the early days of Vertigo in the early to mid 90s. Good books, good times. The expansion of the British invasion that began in the late 90s thanks to Karen Berger and Shelly Bond – both editors now elsewhere at Dark Horse (Berger’s Books imprint) and IDW (Black Crown imprint), respectively, due to drastic changes to DC Entertainment’s editorial structure AND their business model – no longer offering fully creator-owned IPs. But that’s a discussion for another day.

AMC’s The Walking Dead and Fear the Walking Dead will have a crossover in the near future. Robert Kirkman is not yet revealing what character from which show will be crossing over to which show. So naturally with this kind of tease we’ll just have to wait for it to happen.

Coming on the horizon are two TV adaptations of two of my favorite comics. Greg Rucka & Michael Lark’s Lazarus over at Amazon and Ed Brubaker & Steve Epting’s Velvet over at the newly re-branded Paramount Network (formerly known as Spike TV). I have casting ideas for both leading ladies, but that’s another column for another day.

That’s all the comic culture goodness I have for now. Until next time . . . keep turning the pages!