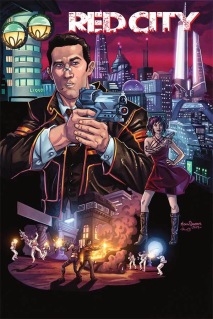 There’s nothing in comics I hate more than poo-pooing a new hopeful Image comic, but I just read Red City #1 and have come away a bit let down after admittedly hyping myself up for it due to its purported futuristic sci-fi/hardboiled crime concept. How was it? In a word: unimpressive. Firstly, it’s hardly hardboiled or noirish (at least not yet). And I believe I read somewhere that the creators really don’t intend for it to have the traditional dark trappings — the incessant pessimism and suppressive atmosphere — of hardboiled crime/noir. So a different take, which I totally support, but it’s probably best to simply not use the words “hardboiled” or “noir” when describing Red City. Only one issue in, the story has the makings for a fun series. But the exposition-disguised-as-first-person-narration really bogs down the narrative drive. I got bored pretty early with it because of its voice. Worst yet, in a book of this kind, this genre, the dialogue should really bounce and be the sharp hook, but unfortunately it was not. I totally understand the need for world-building, especially in a sci-fi first issue, but despite some well-plotted backstory giving some historical spine to the high concept, the overall execution lacked muscle and was, thus,  a little limp. Not every comic can be great at launch, but this one struck me as a bit bland and lacking seasoning. Art-wise, it was competent and fine in the storytelling department, if not overly appealing to my tastes.

All of the above aside, I do think it has potential, however, and with a little more time in the oven it could get to tasting a lot better later on. Yet, considering the high volume of new series this summer — at Image Comics alone — competition for my dollar is fierce. It’s very unlikely that I’ll grab #2. I’ll keep an eye on it though. It might be a viable trade-wait option (which is just as important as single issue sales on indie comics in their infancy).